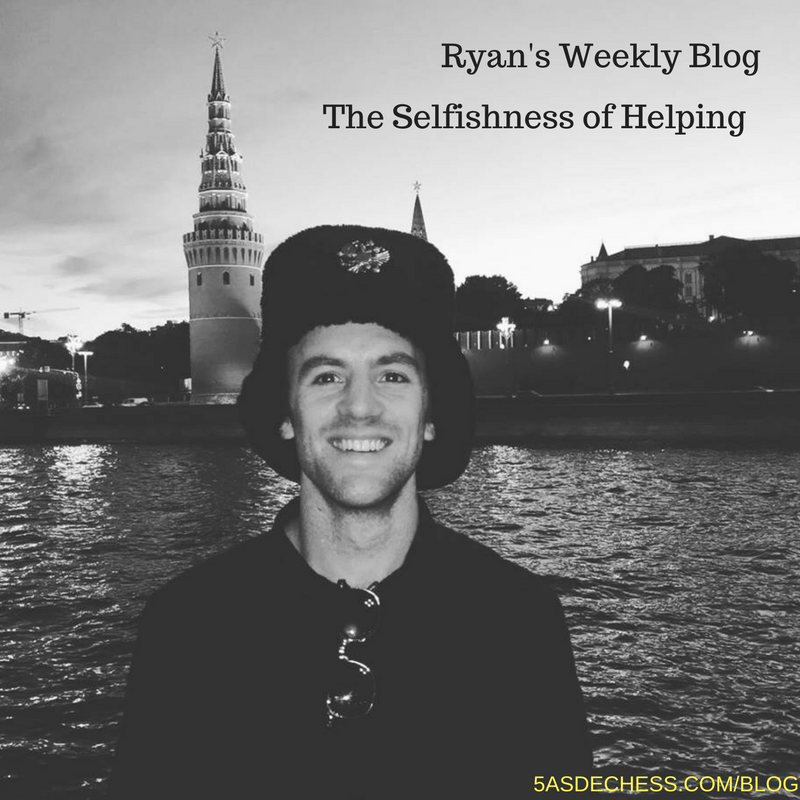 We are all submerged, even now the clocks have turned, in the liquid ideas of after-dark. Away from anything solid or true, blowing hot air at ourselves. Rushing on worries about our social media lives and the jobs we do to make other people rich. Am I doing well enough? Moving fast enough? Is it me on that sailboat in the picture?

It’s all part of our narcissistic society, where we are told its unique to be an individual even though there’s more than 7 billion of us. It’s this belief in the individual that advertisers and social media moguls use to control us.

If you want to really distinguish your quality of character, though, try helping others, try community, try real life.

Most days I wake up absorbed in myself. Deeply set in my world and how important it is.

By my bed there’s a huge, floating library of videos where the injustices of the world are beamed into my face, spinning me into the destruction of distant places. This process has gently anesthetized me over time.

Ahh Monday, the numbing tentacles of overpriced WIFI stream another savage day of Syrian children washing up on European beaches to me. Fading out. Next episode loading, Netflix style,  into burning rainforests and Yemeni famine. My earl grey is a little hot as I switch over to accidentally double clicking instagram pictures of girls who look completely different in real life.

An email pops through on my fruit-based device. It’s the rent. I owe money. Luckily, it’s my last payment because last month I moved out and split up with my girlfriend. I can’t fall in love, apparently.  A counselor once told me that I was ’emotionally retarded.’ Cheers Doc.

The burden of rent and bills and compromise, slightly relieved, is replaced with the tragedy of stretching out in a double bed knowing it’s no longer a short lived luxury. She won’t be back with the milk. There is no dog to be walked. You’re back to average sex with strangers and no breakfast.  Newly single people mainly curl up into balls.

Gently unballing my reasonably short limbs for an adult, (if I was a 13 year old my legs would be above average) I push away the covers, squinting into another Brexiteering, Syrian Bombing, Trump crying, pornographically obscene morning of news reading.

Ahh, fantastic, Estonia has backed up its entire country onto a hard drive and sent it to London for safe keeps. Away from the Russians. Luckily I’ve followed suit, uploading my emotions into a dead-heart-cloud in the sky.

My Anxiety and His: Social Media, Suicide and a Solution

There’s too much that wants a bit of my compassion so I’ve decided to evacuate it.  Sent it off on a train, away from videos of ISIS decapitations and mental breakdowns of the housing market. Most of my friends have done the same. Some of them require alcohol to do it, some prefer drugs, but they are learning. Learning to shut off. These days I just feed off dopamine drips from smashing through Tinder and Instagram.  Slowly hobbling through a world too big to comprehend, too small to escape from.  Some of us think we travel, but getting on an airplane is just arriving somewhere else.  Most of us have left the idea of a journey behind because it takes too long.

What the fuck is a Millennial ?

And there it is; the uninterrupted, unattached, disconnected spin of a snowflake generation. Branded as Millennials. Defined as an orphan generation, because without parents our problems are all our own. Nobody wants to take responsibility for the inherited life-  tax of mass destruction, extreme wealth gaps and grotesque food bank austerity we have been left with.  It’s more fun to laugh at young people fed up of dealing with it all. Fucking snowflake bitches.

Why you are Failing to Attract Millennials to your Business

So we go back into the great library of destruction by our beds, zone out, swipe right, fawn and follow, get high, drink booze, “travel” and tranquilize.  The great misconception is that we are more emotional than the generations before. The truth is that we are more anesthetized than any other. Two girls and one cup would send a Baby Boomer into shock. I could watch it at dinner. Our emotions are fucked and lost. Boys spin around at midnight worrying about a comment they left on Jenny’s post of her dog, then watch dead-eyed as a machete cleans a head off a neck.

The whole problem relates to the fact that information has become capital, the biggest product in the world, and it’s so dense, so everywhere, that we no longer know how to filter or use it. All of the world’s injustices and perfect six packs are available at the touch of a button, sliding into our enzymes. And the people hosting them get crazy rich while we go mad and stay poor. When it comes to the world’s problems it all feels like too much. Trying to help just seems pointless.

But, honestly, forget the dying kids in Syria for a second. Ignore the starving people in Yemen and close your eyes to the slaughtered Rohingya. Maybe lose the idea of nationalism for a moment as well, or anything with ISM on the end actually. None of them are here to help you.

Well, maybe this little bit from Marx and Engels will, as Yanis Varoufakis pointed out in a recent article, they say that if we distract ourselves from the duty we owe one another to get out of this cycle of consumerism, we enter a “vertiginous spiral in which capital saturates and bleaches the human spirit.” Basically, if we ignore the debt we owe each other to ensure a better way of living, we lose our own richness of life.

So what’s the Solution?

For me it was accidental and still a work in progress.  Last week I spent an afternoon at a student welfare meeting, playing chess and chatting with students that find social interaction difficult. By the end they were talking and laughing. A guy from Mumbai said the south west of England is like a ‘big garden.’

The next day I was in a homeless drop-in playing chess and talking to two people.

Karen is 42 and lives on the streets of Bath. She learnt how to play chess from a gulf war veteran junkie who stole two tents and hoarded food bank food in his spare one.

“He chased the dragon and I went and bought the milk,” she said.

I went home smiling. Laughing actually. Connecting with people that really appreciate it. Realising I do to. And I’ll go again, for them and for myself. Because why not? There is a beauty in the selfishness of helping others.

At 5asideCHESS we go out and help people connect. People from everywhere. Rehab clinics, homeless shelters, universities, cafes and nursing homes. And let me tell you a secret. It has changed my life. I’m still an idiot but I feel so much happier. I still make dumb decisions but they are mine now.

I still say stupid things but I’m not really bothered anymore. Why?

Because I let my compassion back in, and the real kick with compassion is that it’s tangible. You see it reflected in the faces of the people you give it to, which is something you forget when you only see yourself staring at heartache and tragedy on a screen.

You can become a HELLO Person and do the same.