Social Isolation and loneliness are pretty much unbounded. That is to say they have no bounds. That is to say people everywhere are affected by it. That is to say there is no fixed abode to the work we do at 5asideCHESS. So last week we went on a little tour of the North, playing chess and chatting to people in Nottingham, Macclesfield and Manchester. Oh what fun we had.

A big thanks to Regency Chess for supplying us with the Giant Chess Set !

5asideCHESS is not just a game. It is not limited by four white lines or the start and finish whistle. We constantly find new arenas where the issue of bad mental health plays out to the tune of homelessness and addiction, where social isolation kicks people out of touch, and loneliness builds to the tragic crescendo of suicide.

These are terrible ends, homelessness, addiction and suicide, but they all have beginnings we often miss. First chapters to stories we could of avoided, tragedies that could’ve been romances.

And there’s no doubt that connecting and communicating is a proven way of writing and re-writing these wrongs. But the connecting doesn’t have to be with close family and friends. There’s also huge and everyday benefits to talking with people you wouldn’t normally. It’s what this study has termed ‘weak ties.’ For example, students reported higher feelings of happiness and greater feelings of belonging when they interacted with classmates they wouldn’t normally talk to.

Fast forward a few decades and we see that 59% of adults aged over 52 who report poor health say they feel lonely some of the time or often, compared to 21% who say they are in excellent health (Beaumont, 2013). There are more statistics proving the case for connecting, our driving force here at 5asideCHESS, at the Campaign to End Loneliness’s website.

These are things many of you already know, unlike the fact that you need a permit to play giant Chess Manchester, as the video above shows. After that escapade ended we asked the fine people of the Ministry for Not Putting Chalk on Stone if they wanted to connect. They did not. Fair enough. Luckily, in the Northern quarter we played Chess with Kate atZiferblat on Edge Street. They have the best coco pops there, by the way. I also got a parking ticket and realised my windscreen wipers have somehow rusted. Joy. 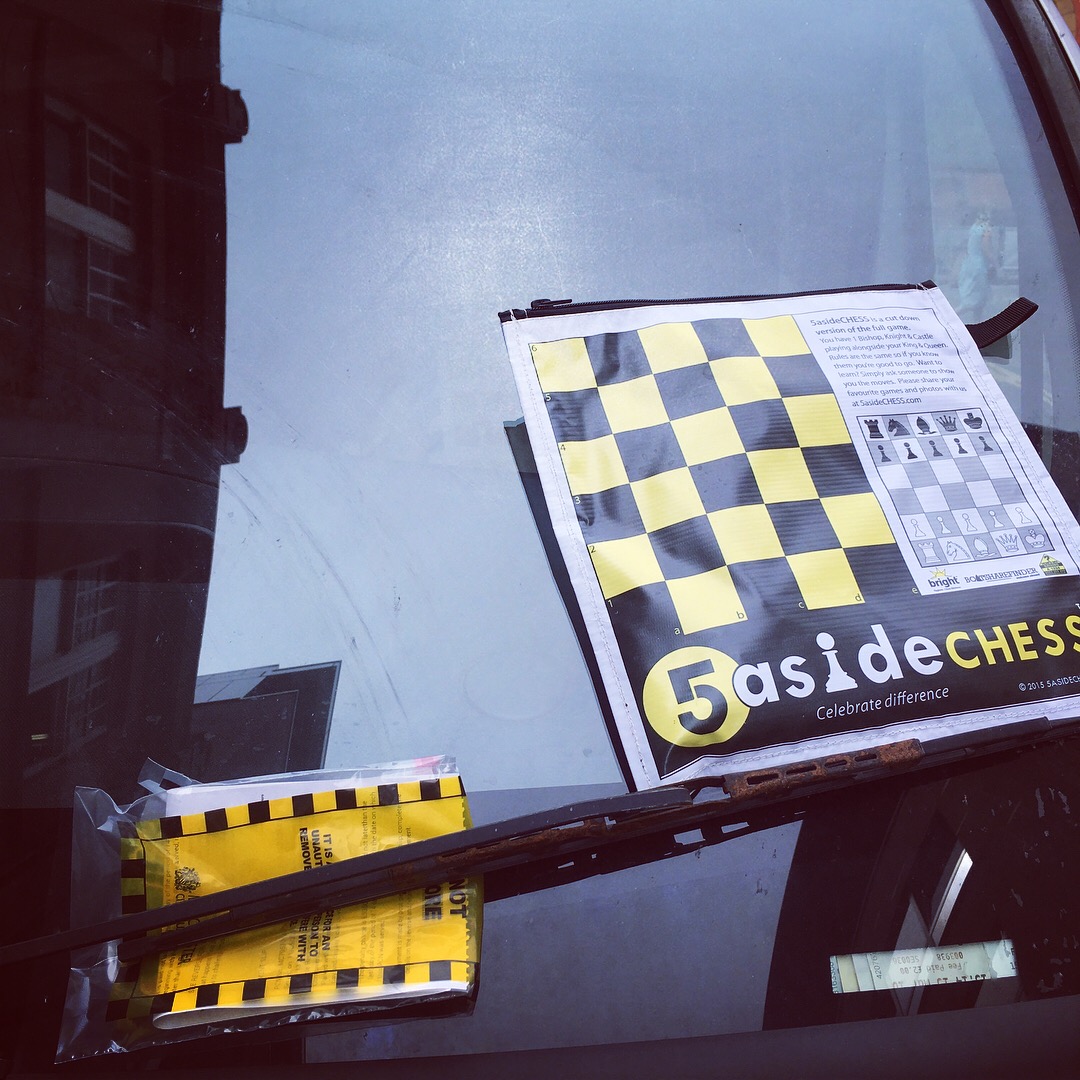 If you want to connect then message us and let us know how we can help. Our boards will be available to purchase from RegencyChess.co.uk very soon !

Talking of our boards. A huge thank you to Ellie and Mark over in Nottingham, who gave us some great ideas about making the chess boards more instructive. The more barriers we can remove then we hope the more people will be able to connect through our model.