Emily and how Big Charities are Killing us 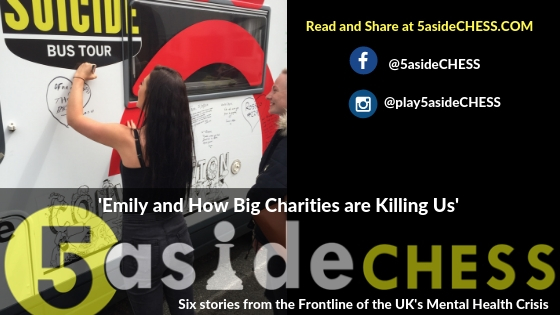 It’s funny how some people have a sixth sense for food. Whenever dinner’s ready they knock on the door. Even on the Battling Suicide Tour.

Emily came with Cake. Sean appeared out of nowhere. Tracy was already out of The Grassmarket, with her beer, diagnosis and confusion.

A few birds pecked the cobbles. A tumbleweed had missed work. The Spanish waiters, with their tight short back and sides, poured drinks from great heights.

“I rest my case.” Sean grinned and moved a pawn.

Emily laughed and shook her head at herself. As well enjoying veg, Emily is a one-man band mental health charity.

She played 5asideChess with Sean and started explaining how an apex, carnivorous charity devoured her chances for getting funding.

Her problem, it turns out, is a common and capitalistic one, and it’s easier to explain in a video. But before this page ends in moaning, it’s worth saying that the cure to all this is getting people like Emily together with likeminded individuals so they can work together and fight against the corporatisation of the third-sector.

How do we do that?

Well, we have the chess boards and the ethos, so get in touch and let’s work together to build connections in your city and stop big charities DRINKING YOUR MILKSHAKE.