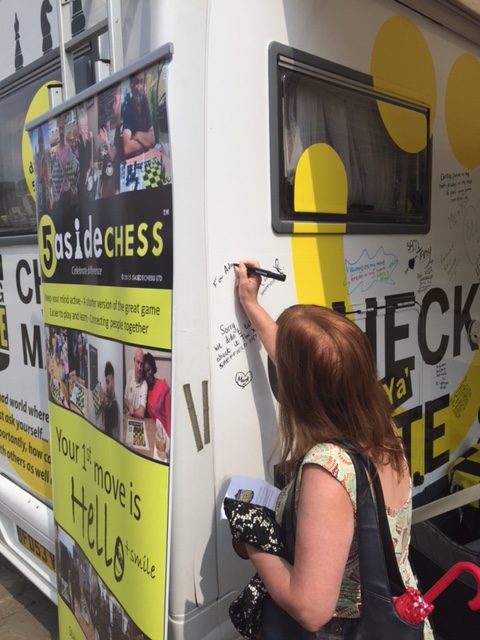 Sponsored by kitchen cleaning company, Bright Hygiene, the 5asideCHESS Battling Suicide Bus made its first visit to the hospitality industry at the Restaurant & Takeaway Innovation Expo at Excel London on November 19th and 20th.

It is very clear that the hospitality industry need to take action on their employee’s mental health and well-being. Research from the Royal Society for Public Health found that a quarter of hospitality staff have reported seeking psychological support or medication. Four out of five reported increased stress which was believed to be a direct consequence of their job. Suicides are high in the industry, particularly amongst chefs. Long, antisocial hours, verbal abuse, financial problems and drug and alcohol abuse are prevalent. Worryingly, 62% of workers in the hospitality sector do not think that employers take care of their employees.

As they always do, the 5asideCHESS team had some incredible, very real encounters at the Expo. Visitors to the show were really interested in how 5asideCHESS and the Battling Suicide Bus are being used as unique and very practical tools to get people talking and make connections in the real world.

The 5asideCHESS Battling Suicide Bus team are calling on hospitality industry players to show they care about mental health by standing up for their people and getting involved. The Bus has been on tour since July 2018 visiting towns, cities, universities and workplaces in a battle against loneliness, social isolation and the mental health problems these issues cause. The bus has been signed with over 300 messages to people lost to suicide making it a powerful catalyst for action and change. Strange as it may seem, the team use a smaller, quicker version of chess as an ice breaker to get people talking. Chess has been played for centuries and has well documented mental health benefits as well as teaching strategies for coping with difficult situations. The real message though, is to ‘Check on your Mate’. So many of the messages on the bus run along the theme of “I just wished we had talked”.

The 5asideCHESS Battling Suicide Bus team currently work with the prison service, universities, mental health wards and homeless projects as well as schools in Zambia where 5asideCHESS is being used to help tackle local issues at primary school levels.

Set up as a social enterprise by a team from the hospitality sector, this industry is close to their hearts and 5asideCHESS will be heavily involved in the hospitality industry over the coming year. The Battling Suicide Bus will be made available to visit workplaces to train teams about mental health in a real world, practical way rather than in a theoretical classroom setting and to help get people to take responsibility for their own mental wellbeing. If you’re interested in getting involved and making a real, lasting difference to those working in the hospitality industry email hello@5asidechess.com or contact Ross Smith direct on 07778 463597

Previous post:
My journey to change the game of life using 5asideCHESS – Kamwala Primary Next Post:
Ciara – My day on the Battling Suicide Bus