Glasgow is extra strong Ribena. We only spent one day there but met a concentration of people from all walks of life.

Divya and her little dog harris spent a good amount of the day with us. She turned into a 5asidechess team member pretty quickly, inviting people to chat, connect and have a cup of coffee. She even went over to Project Cafe near Fleming House and gave them one of the 5asideCHESS sets bought with donations from the public. 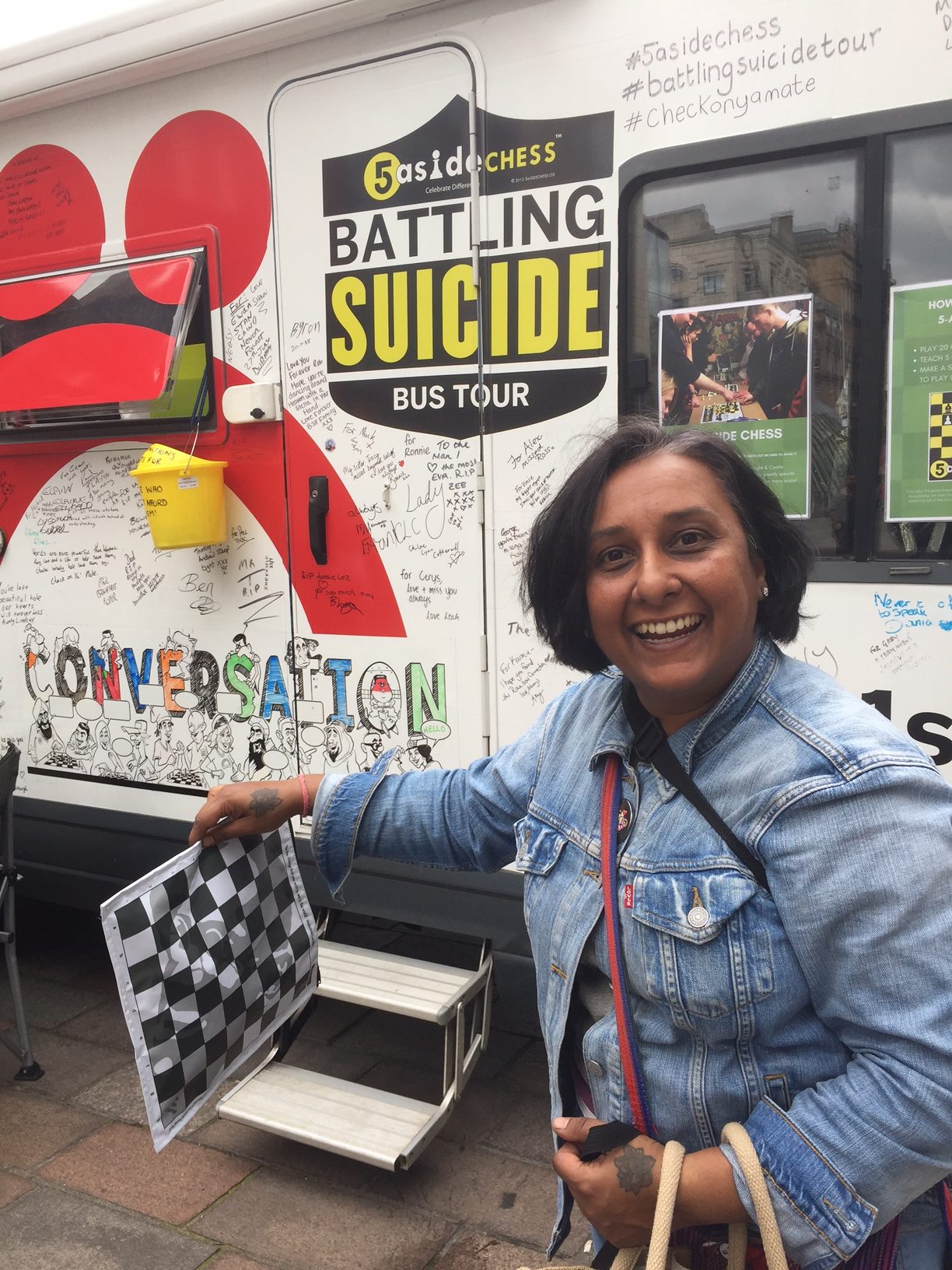 Then Donald arrived. “I’m a Schizohrenic,” he said. “And I believe the key to good mental health is spirituality.”

Every night he places three pills into his hand, including the anti-psychotic Clozapine, and asks the lord to bless them. Every day he keeps busy, engaging his mind with the outside world.

“I know if I stay inside my house I stay in side my mind, so I go out to Eucharist worship, I meet my family on Tuesdays and always attend Mass.”

The discipline Donald shows to help himself is admirable.

Sandy was looking sideways at the Battling Suicide Bus. 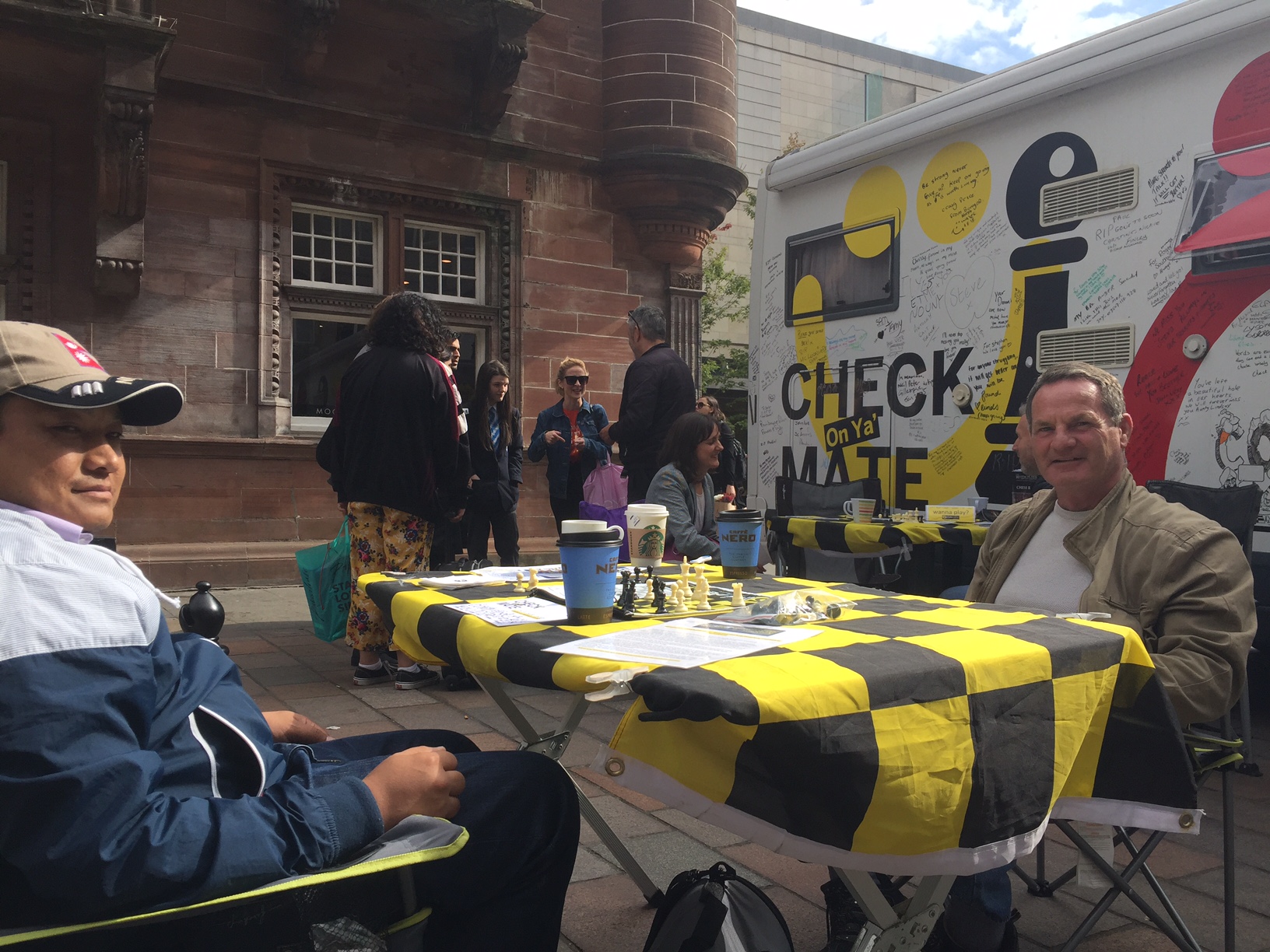 The Battling Suicide Tour has been to more than 10 cites across the UK, including Sheffield, York, Sunderland, Edinburgh and Glasgow. Our mission is to raise awareness of suicide prevention and promote the idea of conversation through our 5asideCHESS boards.

Sandy sat down with Ryan and played.

“I’ve been sober for 15 years. It was time to get out of my own head and start engaging with the world more.”

Dhonu was watching the game. He had come to Glasgow from Nepal.

The two of them played a few games and chatted. Sandy kept learning the game, kept talking. Then we had a visit from the Real Junk Food Project. Laura uses surplus food from supermarkets. She brought us vegan chocolate cake. 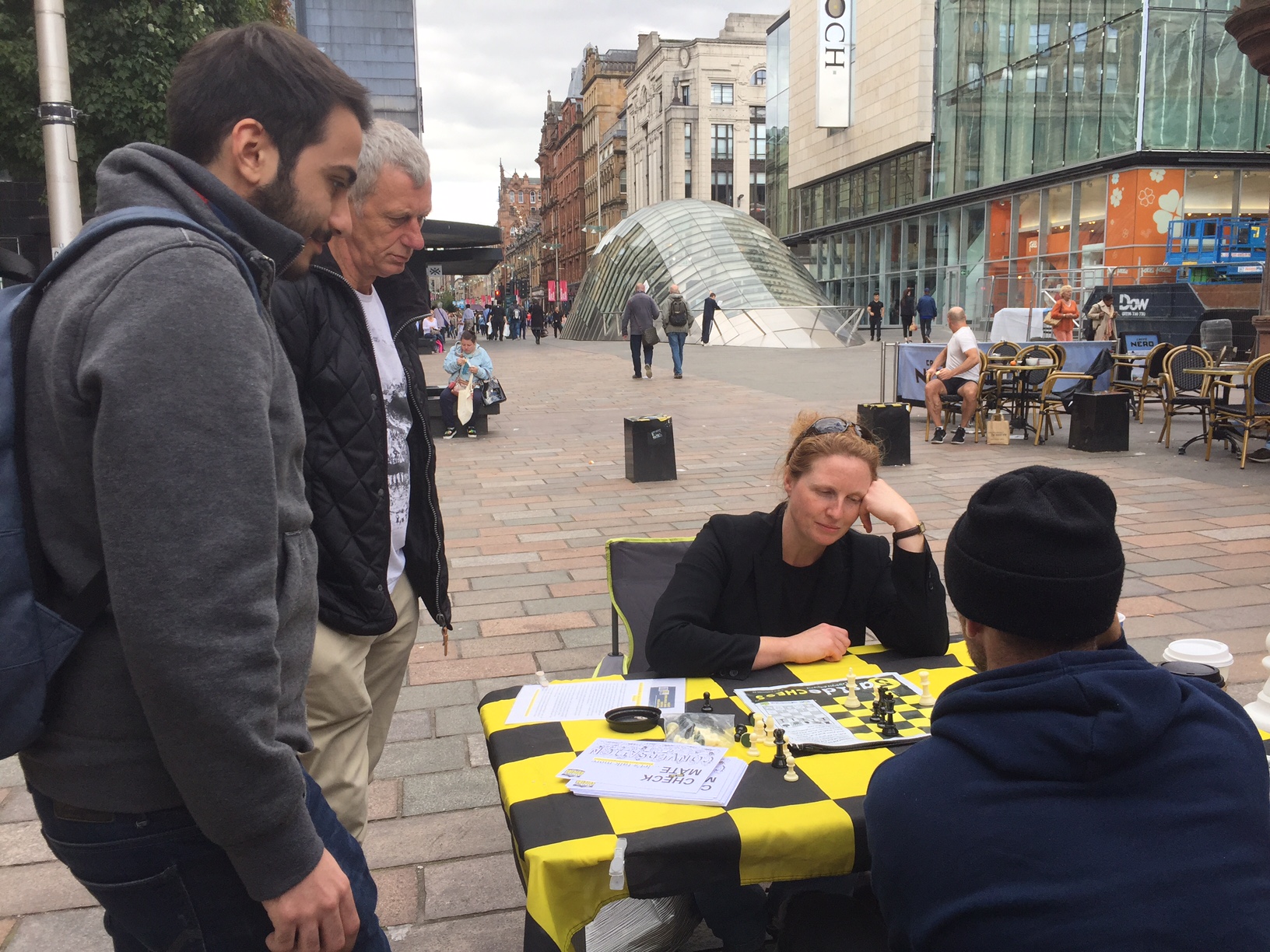 So at about 3pm, in St Enoch Square, the Battling Suicide Bus had a real community feel about it. An Italian guy named Ricardo sat down and played Sandy. Dhonu went to the Cafe Nero next door and bought us all coffee. He didn’t have one himself. Sandy had Decaf.

Ricardo’s English was limited, but he was able to teach Sandy how to castle his king without much trouble.

Ross was on the other table playing against a psychic named B. Once there game had finished she came over and chatted with Sandy. 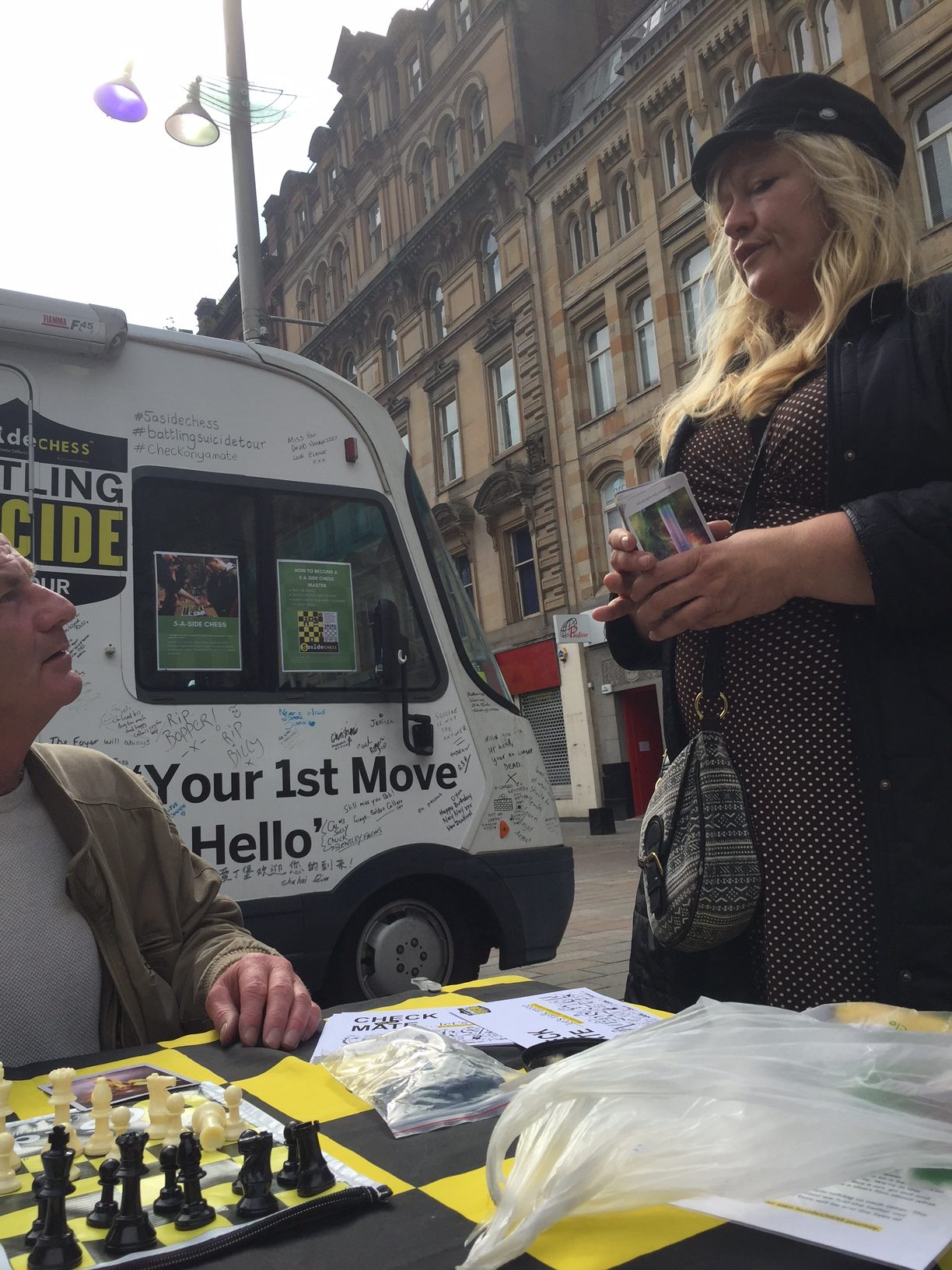 “You had a close shave with life but you came through it.”
“True,” Sandy said with a big smile.

B the Physic was trying to get down to Devon but didn’t have access to the internet. Another 5asideCHESS player, a woman called Char, used her phone to book B a flight home.

It was 30 minutes after this that Donald returned. He had bought us gifts from the cathedral. As he left he grabbed Ryan and hugged him.

Glasgow was one of the most memorable days of the Battling Suicide Tour so far.

It ended with Ibrahim from Sudan and Farouk from Egypt playing a game of chess and eating vegan cake as the other table was packed away. The team drove onto Morecombe bay at around 830pm. 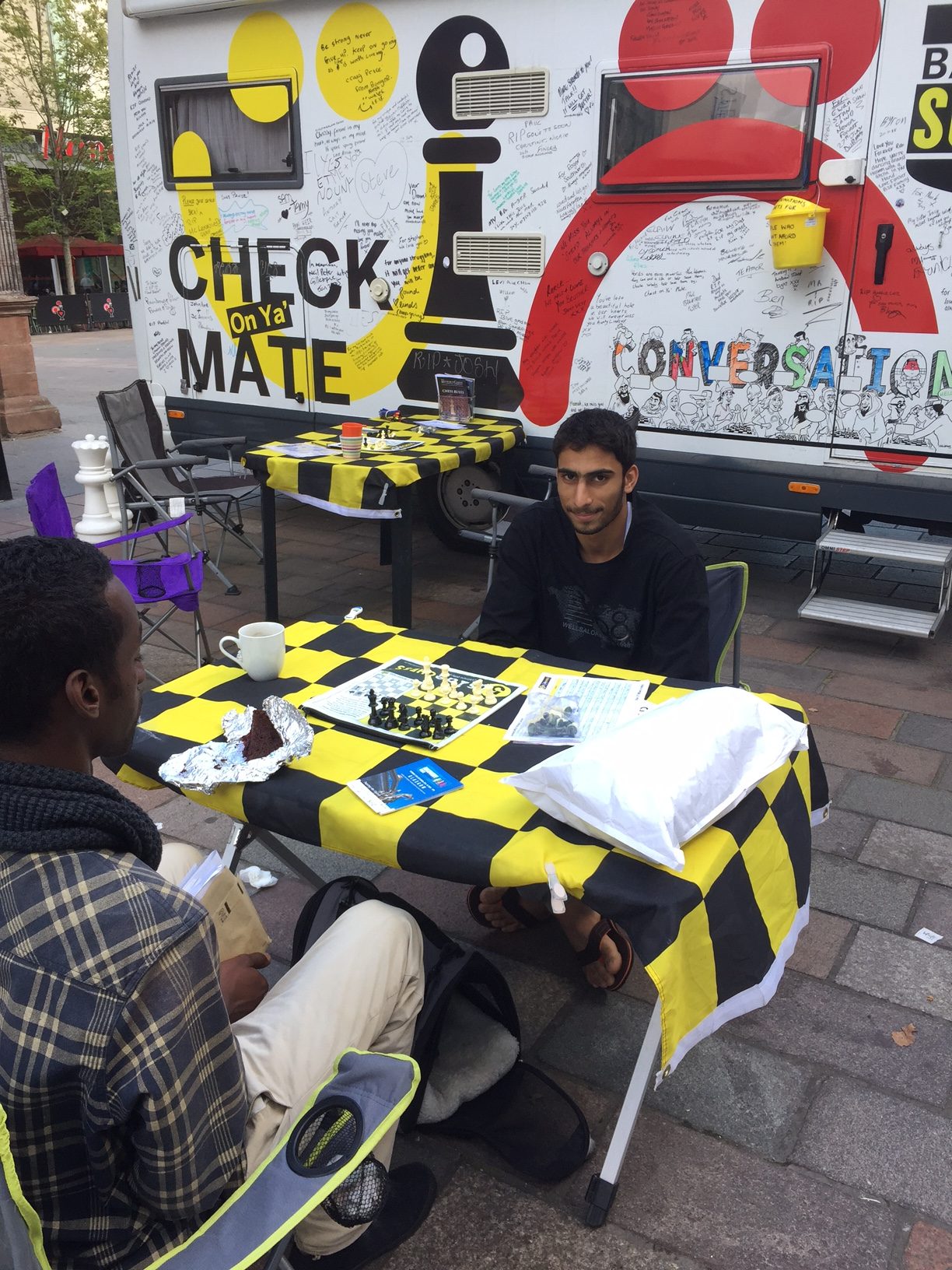