After five days on the road there is a recurring theme. People are killing themselves after being failed by the state. I think it’s important to say that it’s not always the fault of the people involved, although with Steve’s story I think it is. A lot of the time it’s the lack of funding to support mental illness treatment. After talking with so many people affected by suicide in this first Battling Suicide Tour week, I am starting to think we are spending the money we do have in the wrong places. It needs to be more about community and prevention, and far less about last ditch, drug-based treatments that can eradicate people even if they remain alive. 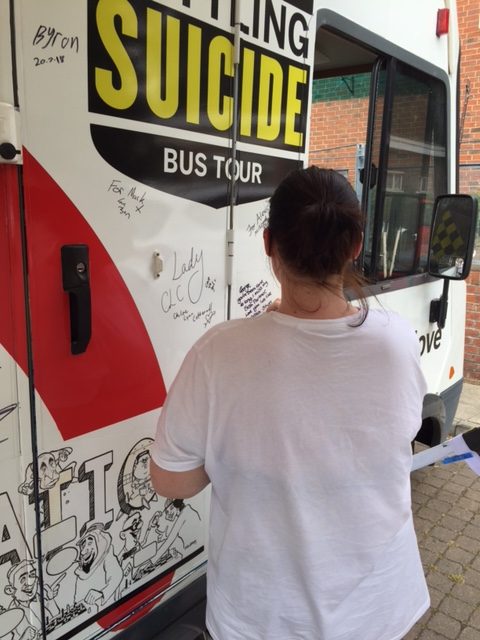 “My sister Eve was a heroin addict and had gone through some stuff in her childhood that none of us knew about until after she died. She was sectioned to a mental hospital on a Friday after attempting suicide.

In the Sunday she managed to convince staff to let her ‘pop out’.  My sister had a way of getting what she wanted. If she wanted it she would get it, basically. Anyway, it turns out she went out to score some cocaine, even though she was supposed to be sectioned. I still can’t believe they let her out. On Sunday evening I was called because they found her on the street. She had jumped off the biggest building in the city.

Now she is gone we are allowed to see one of her children Tom because he was already in the care of my mum, which is Tom’s grandma.  Social services won’t let us see his sister and insist she must be in care. Privately we were told that the only reason is that the social worker in charge would get a promotion if she could make sure my niece was kept in the state system. This whole situation has cost a huge amount of money in court fees but, way more important, is that it has cost us a sister, a mum and a granddaughter when it could have all been avoided.”

“I don’t want to bore you with this story, but it started when my son ran away ten years ago. He was 14 at the time and just disappeared one day. Of course this was hugely upsetting on its own, but it was made far far worse by the treatment of the officers in charge. They played good cop bad cop with me and had me as a suspect in the case. Their bullying made me want to kill myself. I felt like if I took my own life then I would be out of the way so there would be a new focus on finding my boy. Honestly, I urge any young people to think of the significance running away from home has with the people around them. And with the police, well, it might help them pin a crime on someone if they suddenly kill themselves. Blaming the death on the guilt of the crime, but this type of behavior, with no duty of care, is awful and wrong. Ten years on I’m still fighting my case against them.

If my friend hadn’t found me and cut me down I would be dead today because of them.”

Christine – Filled with Drugs, Not Hope

“I’ve known Christine since we were very young. She had been all around the world and settled back here in Sheffield and we had started spending time together again for a few years. She would come round for dinner and chat with me and my wife. She was always pretty bubbly and great company.

Unfortunately, her sister passed away from cancer and then another member of her family committed suicide. She stopped coming for dinner and she even stopped answering my calls. I contacted her family but they didn’t seem to think much was wrong, and I didn’t feel like I should step in. It wasn’t my place, I thought, and if her family think she’s OK who am I to get involved and say otherwise? I did continue to try and call her but there was never and answer.

Then out of the blue she called me and said she was going to kill herself. I couldn’t believe it and rushed over to see her. Maybe it was a cry for help, I’m not sure, but she had swallowed some pills and was passed out. She survived but was never the same again. She used to say she was going through a lot but couldn’t tell me. I hoped she was at least talking to family. Again, who was I to step in?

Long story short, Christine attempted to take her life again and was taken into hospital. This trend continued for about six months. Nothing changed. Nothing is changing. The last time I went into hospital to see her she didn’t recognise me. Christine just stares into space now. That bubbly person has gone completely now and it breaks my heart. In many ways she has gone. I have to say it feels a bit like the hospital has let her die without actually letting her die, if that makes sense?

There hasn’t been any effort to talk with her or give her proper care in terms of working out what’s going on in her head. Instead they just pump her full of drugs and, it seems to me, they are just waiting for her to die physically even though she’s now gone mentally.