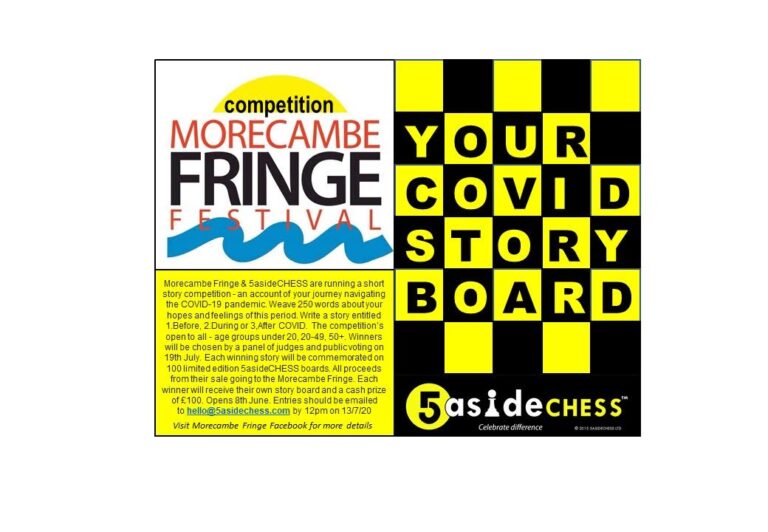 In July 2020, towards the end of the first lockdown, the 5asideCHESS Battling Suicide Bus returned to Morecambe for the first time since 2018 to announce the winners of a 5asideCHESS / Morecambe Fringe collaboration.

Ross Smith, Co-founder of 5asideCHESS said, “We returned to Morecambe to announce the winners of a Covid-19 short story competition which we ran in conjunction with Morecambe Fringe Festival in 2020. We asked people to write a 250 word short story about how they had been affected by Covid and have had entries from Nigeria, Uganda, Philippines, Sierra Leone, Bangladesh, India, Moldova, South Africa, USA, Belgium, Egypt and Bhutan as well as, obviously,  Morecambe and the rest of the UK. Collectively these storied painted a vivid global picture of an extraordinary time.  We decided to bring the bus up to Morecambe again and display some of the entries on the outside of the bus for people to come and read. After all, there were only 15 finalists but we had over 330 entries.”

Matt Panesh, Morecambe Fringe director said, “I thought it was a beautiful, touching idea. The Judges are Barnaby Fenwick from sponsors Bright Hygiene, Geeta Ludhra, Cieran Smith and we are particularly delighted that the Mayor of Lancaster also agreed to be a judge.  They had the unenviable task of choosing their winner in each of the 3 age categories. Their vote, combined with votes from the entrants, decided the final winners who each won £100 and their words immortalised on a limited edition 5asideCHESS set. 100 of each set will be produced and all proceeds will go to Morecambe Fringe”. Ross Smith, co-founder, explains “5asideCHESS is a social enterprise determined to reconnect people in a disconnected world. Loneliness and social isolation have never been more prevalent here in the UK and this is directly linked to mental health issues and suicide.”

5asideCHESS, which is sponsored by kitchen cleaning company, Bright Hygiene, runs the #CheckOnYaMate campaign which visited 40 towns and cities around the UK, including Morecambe. Over 66 days the 5asideCHESS Battling Suicide Bus stopped at markets, festivals, youth centres, supermarket car parks and roadsides. Ross continued “We put the kettle on and played and taught 5asideCHESS but mostly we chatted to strangers who took the time to sit down and share their stories.”

The 15 shortlisted entries were recorded and read out by Morecambe’s West End Players and shown as part of the “Placeholder Fringe” on Morecambe Fringe ‘s Facebook page . The winners were announced on Saturday 18th July.