On Saturday we cracked on with the first ever 5asideCHESS ‘takeover’ of the Urban Food Fest in Shoreditch, London. The idea of ‘Connection’ is already pretty strong at this brilliant event, and next time we want even more people to come along and help us fight loneliness and social isolation. We are also, like, really cool because ITV wrote a little bit about us thanks to the decently decent people over at the Loneliness Charity Marmalade Trust in Bristol. 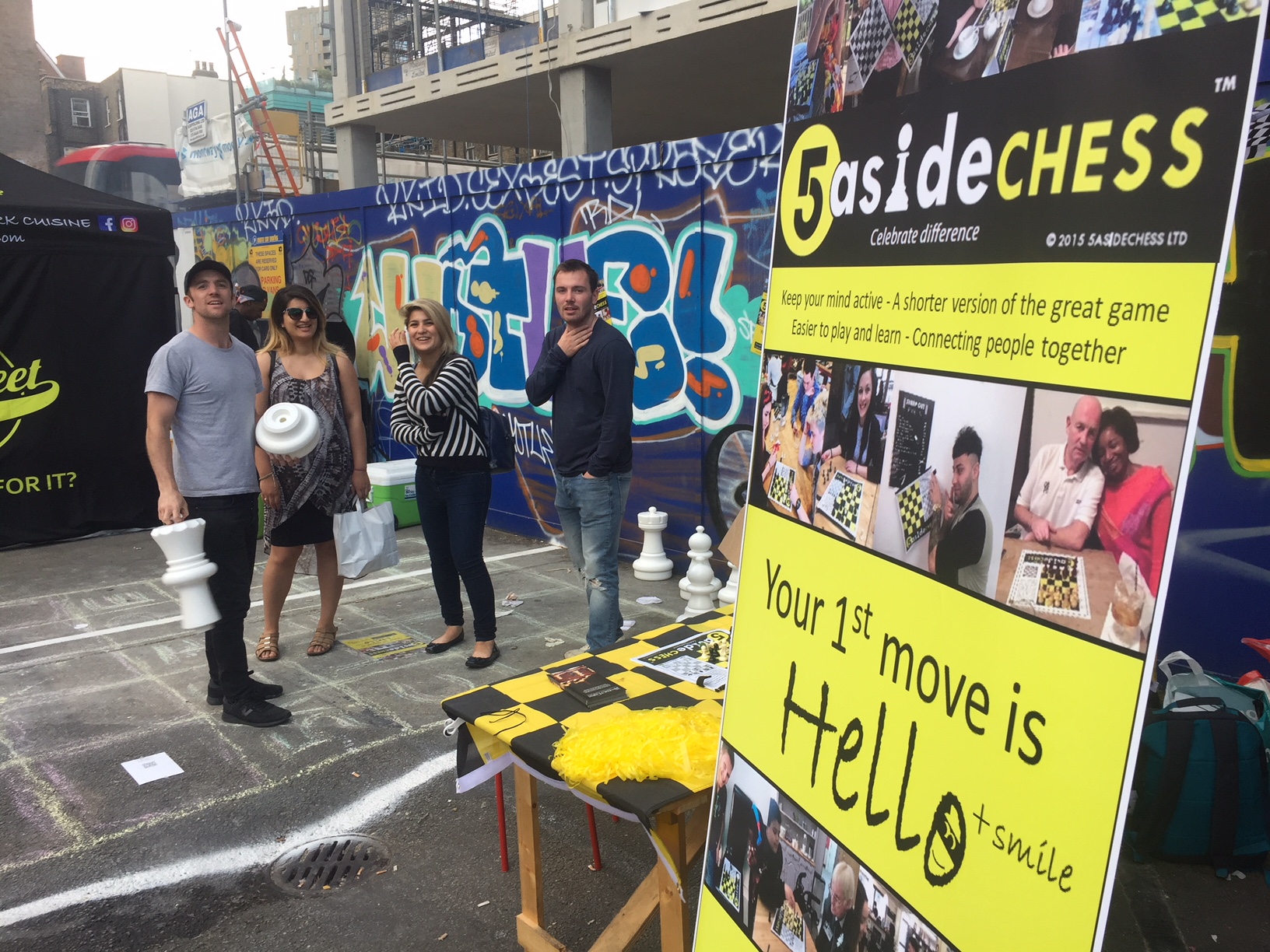 We met tonnes of people during the day and wanted to share a couple of the connections we made.

Ian (Far Right — As in the picture not the political leaning) 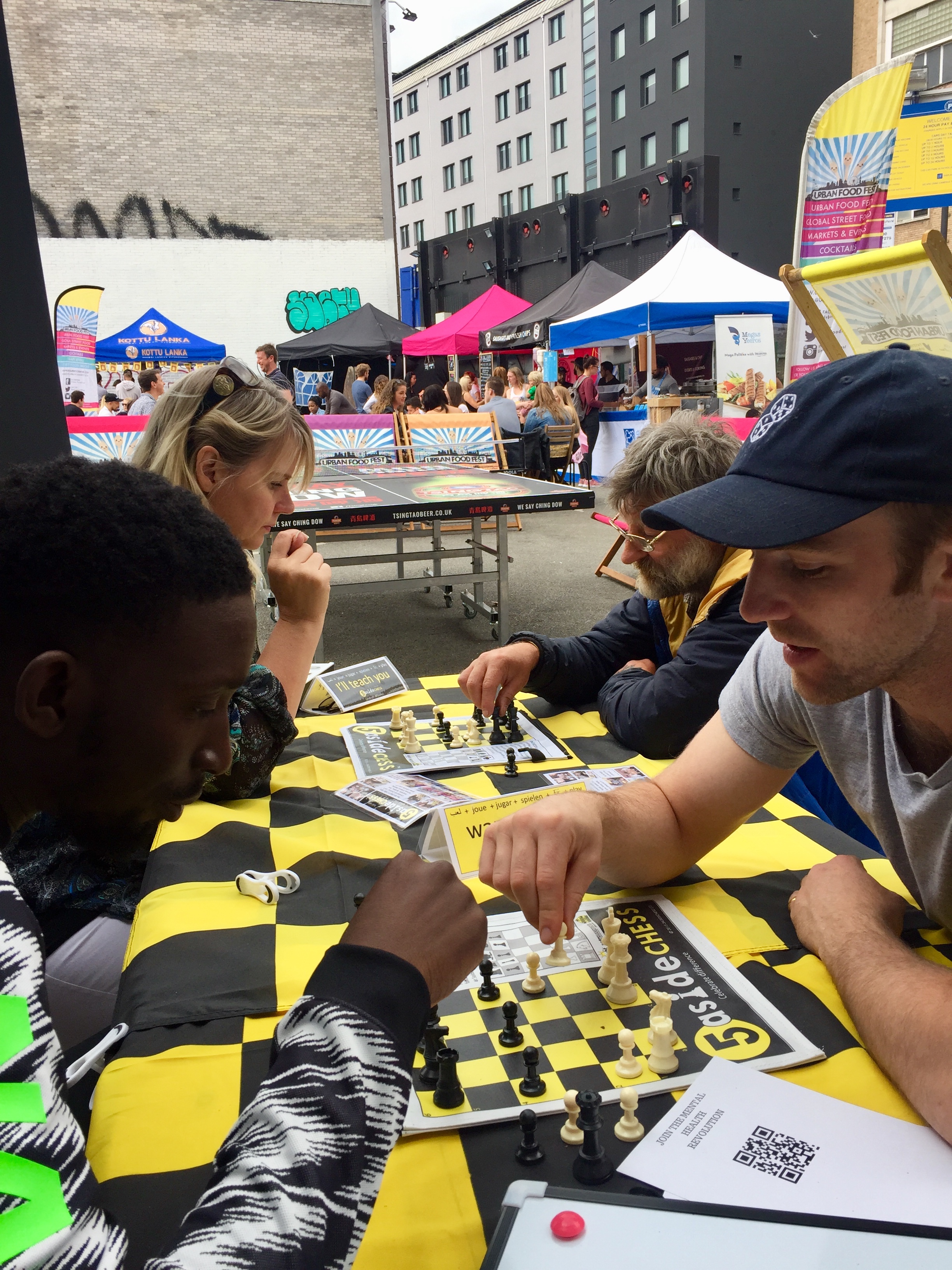 Ian is from Fife in Scotland and hadn’t played Chess in more than 40 years. He sat down with Diane and then our man Ross, playing for more than an hour. A few years back Ian’s wife passed away, which brought on a very understandable feeling of loneliness. Luckily, he has two brilliant grandchildren and another on the way!

Before Ian left to eat over at St Anne’s in Hoxton, he said he could of stayed chatting and playing all day.

Marion and Polly (At the back with the Pom Poms!) 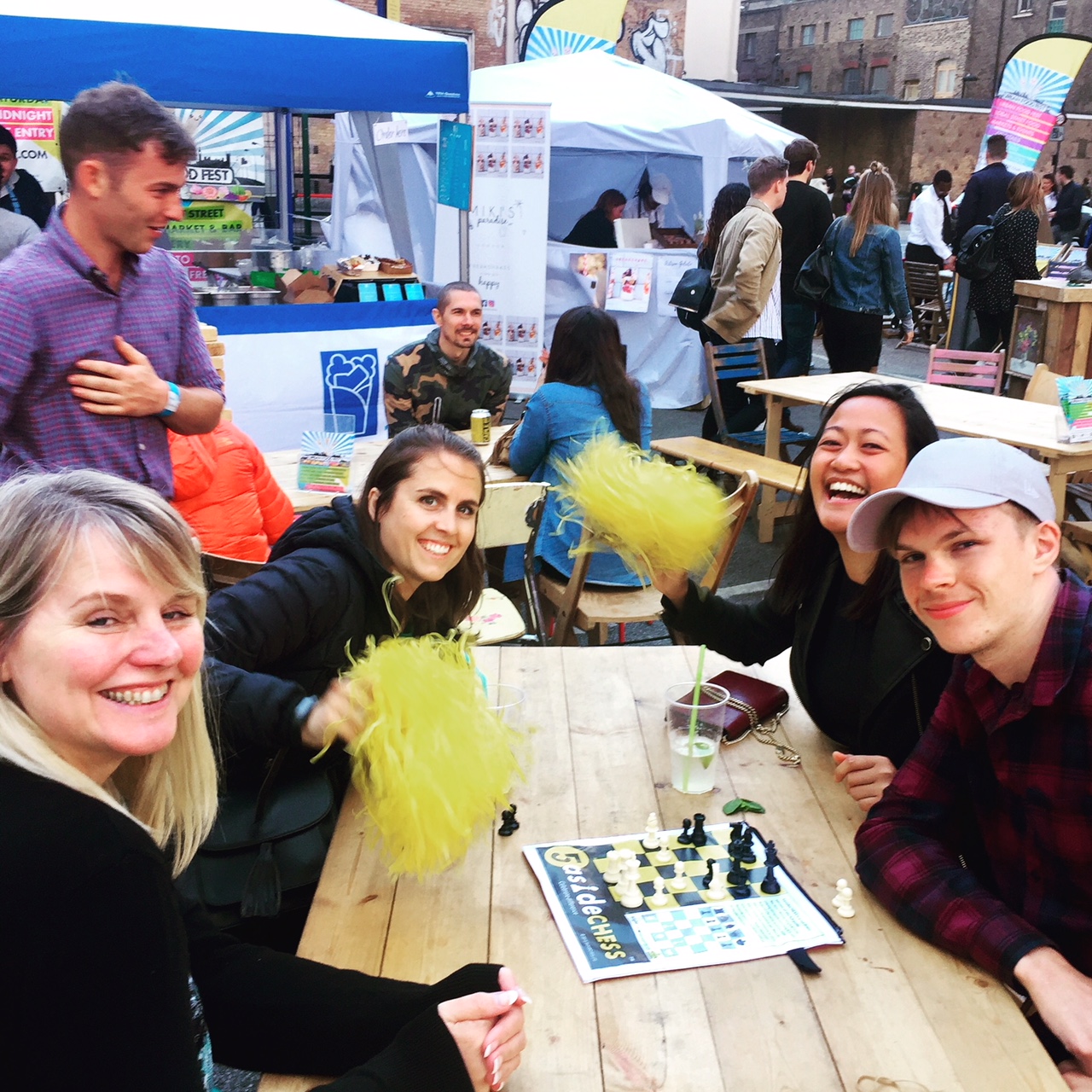 These two French ladies both live in the UK. They chatted with Oliver about the accents of people in France, and how funny people in the south of France are. Marion also attempted to do a Liverpool accent which, to be honest, wasn’t the best we’ve ever heard. It was great to meet both of them, though, and to find more supporters of our campaign against loneliness and social isolation. 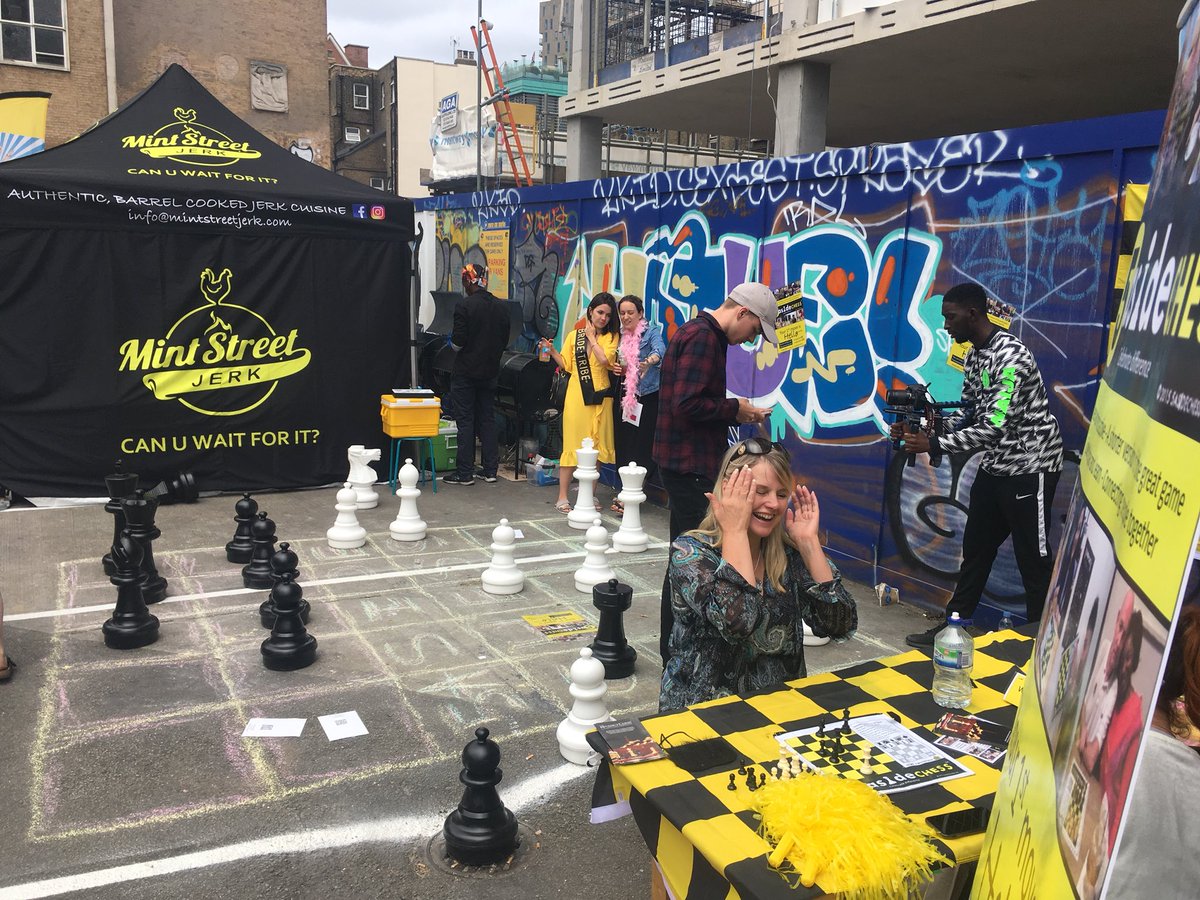 Eventually Ryan convinced them to come over and play Giant 5asideCHESS, even though two out of the four didn’t know how to play. We had a brilliant game and learned that, despite what we initially thought, we were playing with a Criminal Defence Solicitor, a Journalist, a Venture Capitalist and a school teacher. A brilliant group of people. 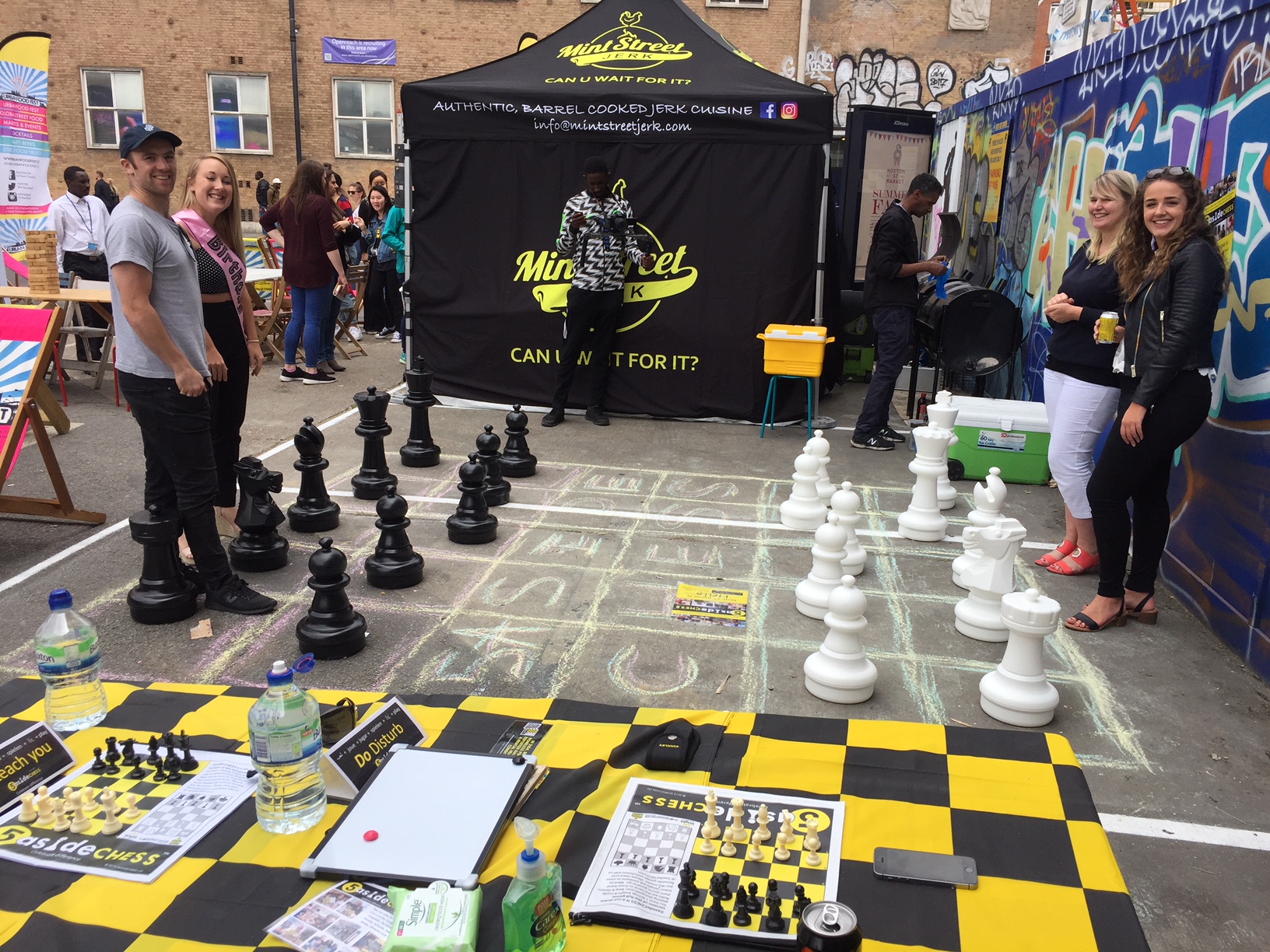 We’d also like to give a special shout out to the guys at Mint Street Jerk who fed us all day. They do all sorts of catering and the pork is beyond good!