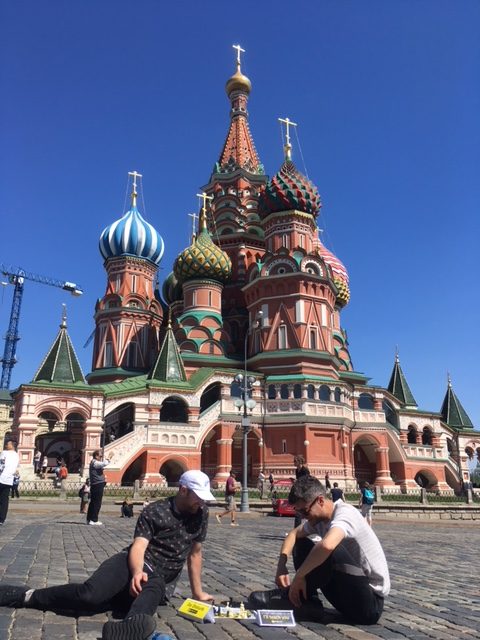 There’s a man dressed in lilac, dolled up in violet, under a plastic purple tree, shuffling along the grey concrete of Moscow.

He is a shaded tulip among the dead stone apartments that crawl, grey-legged, into the Russian sky. Even the rotting metal balconies can’t take my eyes off him as he grimaces, dragging a lame, violet leg behind him like dead weight.

He comes to a bus stop and sits down. I watch from inside air conditioning and stacked in traffic. The highrise hotel is just up the road.

A woman with bright blue jeans and black hair walks up to the bus stop. Captain Scarlet unpeels himself and gets up, waving her into his seat with a long red cane.

Up ahead the light drops to green and we breeze forward with characterless, German-made purpose. 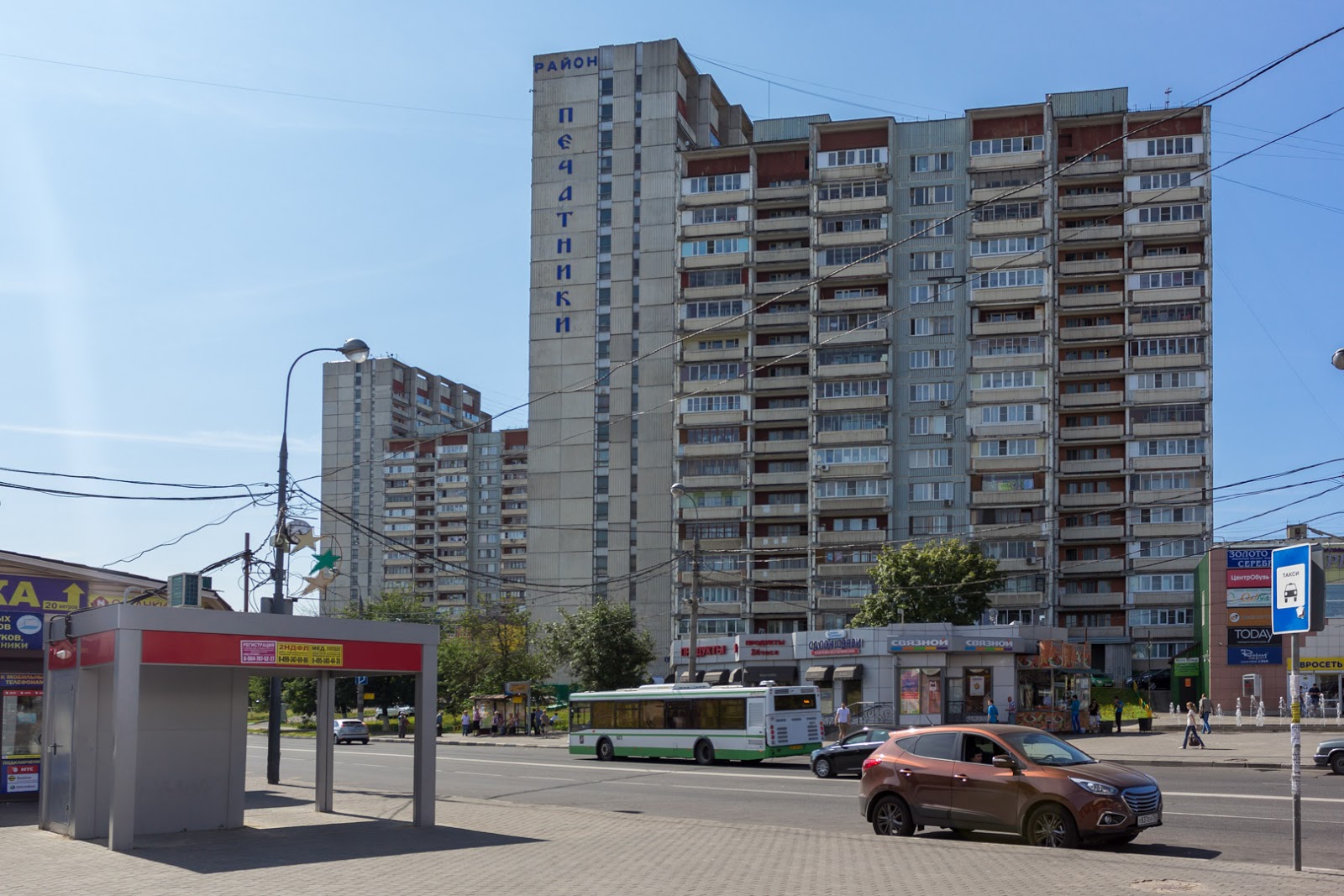 Welcome to Russia, a country as full of contradictions as my own life and the world in general. And weirdly, of all the blessed nations on Apple’s screen earth, it’s America that Russia reminds me of most.

The sky here, like Trump’s big brash land, is big and vast and only ever broken by skyscrapers and moody clouds.  I remember a crimson light crawling up university buildings in Illinois, while Russia is lit by a rising grapefruit sun at 3am every day. 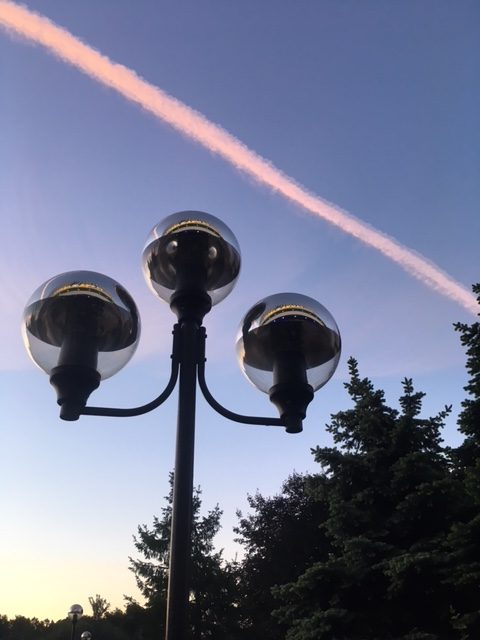 So why am I here with 5asideCHESS anyway? 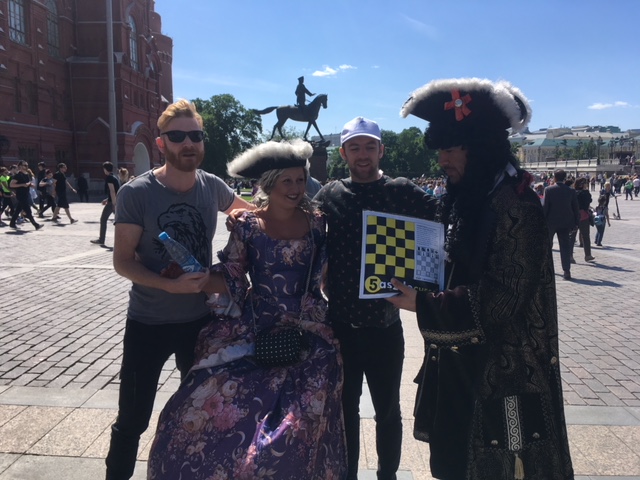 Art football is a festival that encompasses everything we believe in at 5asideCHESS. It’s about connection more than anything. There are 16 teams from around the world that play in a football tournament and also perform on stage each night. The teams are made up of ex-players, musicians, artists, actors, TV presenters and filmmakers. Alexander Hleb formerly of Barcelona and Arsenal played for Belarus. The former deputy Prime Minister of Russia put a shift in on the wing for Russia.  Kazakhstan’s poptastic Abdul-Karim plays in goal for last year’s champions.

And then there’s me running around in central midfield kicking people in the most diplomatic way possible. The best experiences were away from the pitch, though. In the day teams make charitable trips to orphanages and children’s hospitals. At night they come together and make vodka and fruit cocktails and pretty unique memories.

This is the first place, for example, I’ve sat and chatted with so many people from different countries at the same time. For me the conversation was in English, but Italian and Serbian and Polish and German and French were all jumping around the table. I’ve never been more sure of the idea that HELLO, said in any language, leads to understanding and positive connection.

It’s funny, as well, how you really get the sense that the maths of division is the work of governments and higher powers. That adding to each other’s experiences should be the true calculation of people.

But like so many things this is something we all know anyway. We know that most humans are the same. That we all share the same problems with rent and love, parents and rough times. 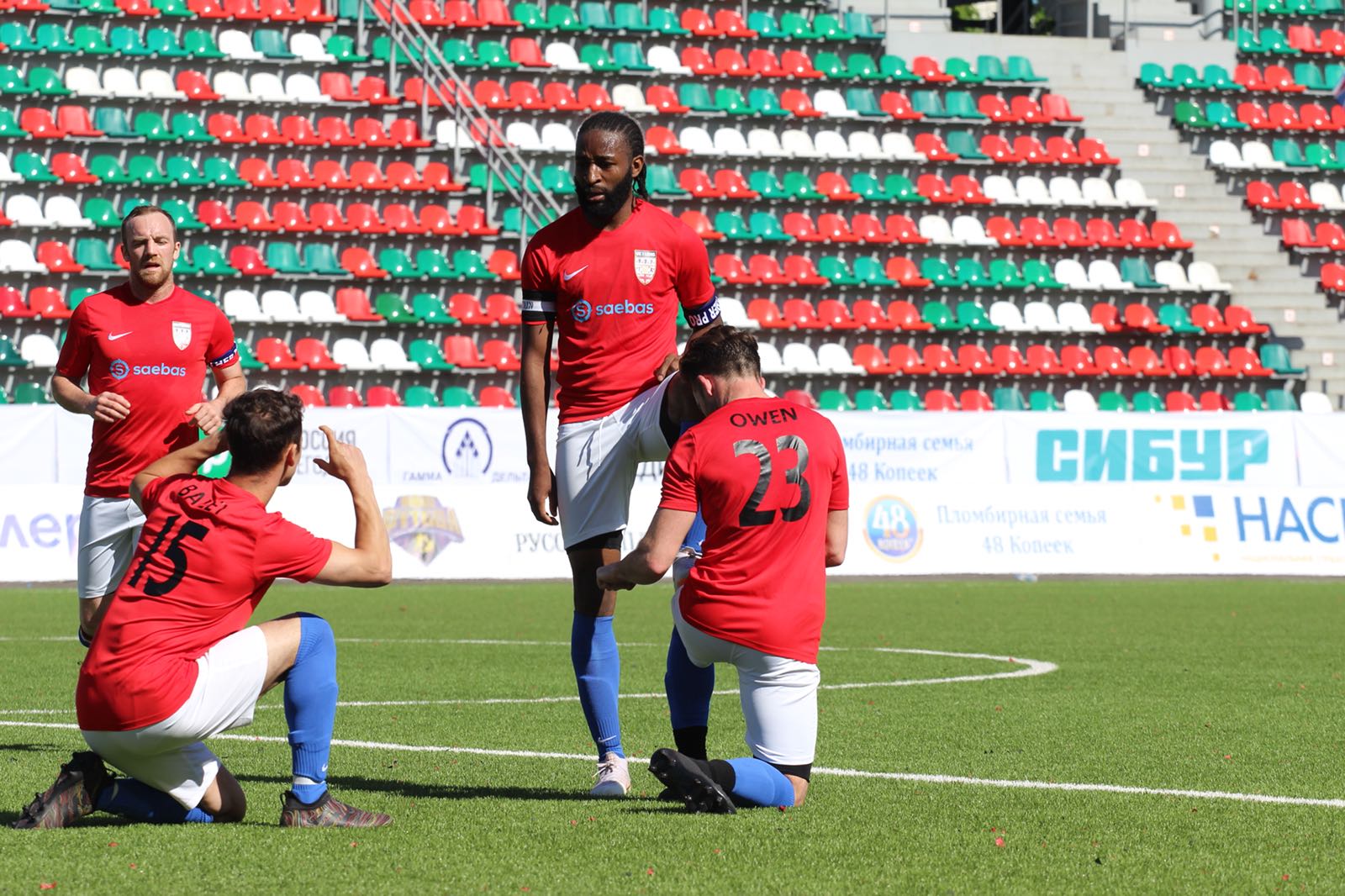 On our team a fully stacked roster of foster brothers and sisters came together to get us through. Jimmy Weston sings like gravel rattled around in a silk bag. Our manager Leo the Lion is also a singer, although running on another frequency, on waves of soul, mixing the currents of music and football like liquid.

To be honest it’s impossible to list everyone on the UK team because they all deserve a paragraph or three.

The boys secured their first win of the tournament on Saturday with a 4-1 win against Paraguay! #uk3lions #artfootball #artfootballfest #uk

Definitely Rico Leacadio is moving to his own fluid beat as I write this, and Isaac Martin is out there laughing somewhere. You can expect our Captain Shameek is passionately moving forward with something and I would be surprised if Carl Owen isn’t showing someone his great humility, hidden sometimes under that Essex bravado.

What a pleasure to connect with this lot. What a treat to know they are out there doing good things. What a bonus connecting gives you.

Giving yourself the chance to know people under their skin, to know they are doing good things. Imagine if we only ever saw Manet’s first impression. What a waste.

On one of the last days in I went to the final all-star game and was accidentally on the same bus as one of our management team, Jimmy Garber. He was rushing a pair of football boots to a player that desperately needed them before the game.  He didn’t mention it to anyone and you wonder just how much he and the rest of the management team (Tanya, Hannah and Siobhan) did without us knowing.

On the ride back home I left me passport on the bus. Yeah, I know.

The next day, after my flight, I was still in Russia. For the next 48 hours I was helped by Russians, Kazakhs and English people in a big way. Anna and Olga, especially. In the end I got home, well, to Vienna at least, where I’ve been looked after unbelievably well again.

Ahhh Vienna!!! Tammy and Lisa playing a game in Austria’s ???????? Capital City…Where have you played? Share with us and help spread the message of #connection with 5asideCHESS . . . . . . . . . #5asidechess #chess #instahealth #instaplay #austria #vienna #mentalhealth #loneliness #socialisolation

Art Football in Russia was the most amazing experience and was just another example of me slowly learning things firsthand that people have already told me. That there are loads of small good deeds happening everyday. Some of them you see, like the people that helped me get home. And some you chance upon, like the disabled man offering his seat in Moscow, or unsung heroes delivering football boots.  And some gravitate silently, keeping the world spinning.